I’ve just spent three days (Well, night-shoots to be precise) playing Colonel Charles Halt in a forthcoming documentary about The Rendlesham UFO Incident in 1980.
We were filming in the now decommissioned ‘Bentwaters’ RAF base in Woodbridge and the surrounding forest of Rendlesham.

During waits and breaks in filming I thought I would take some pictures in the dark forest using a flash to light the darkness.
I took some photo’s of the same scene in quick succession and noticed some strange ‘phenomena’ that appeared in some shots but not in others. 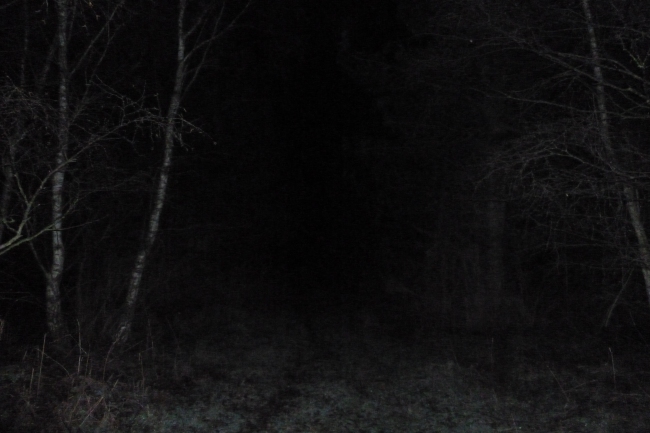 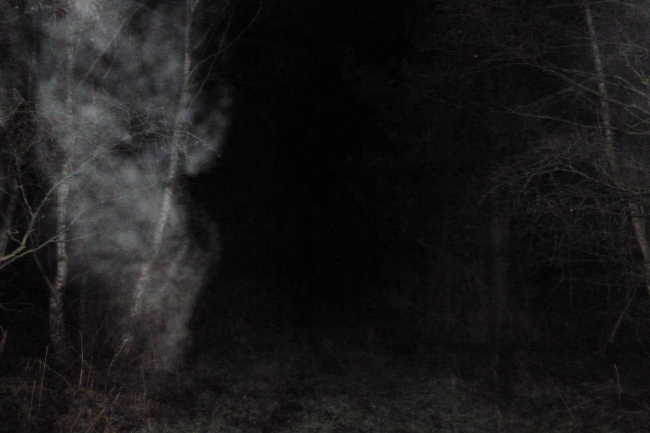 Woah! What’s that on the left-hand side of the picture?
A manifestation of a ghostly entity?
I took a few more shots and caught a few more examples:
Dark Trees: photo 1 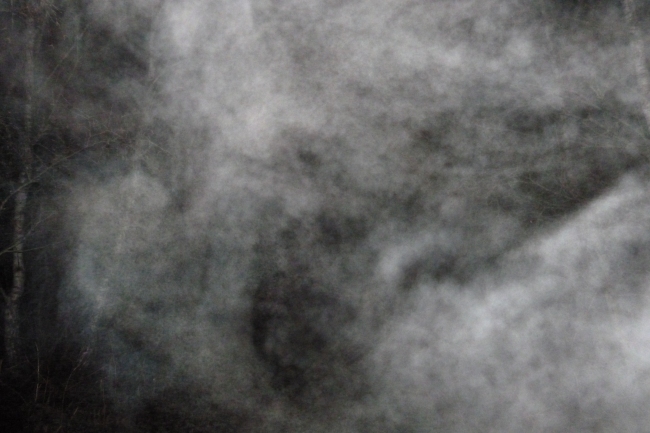 Even bigger Woah!
A much more intense appearance of something bizarre!
This happened several more times and a pleased with my capturing on camera of some possible strange phenomena I showed a few other actors who were waiting for their scene to be filmed.
I decided to take some more shots and one the other actors said he wanted to accompany me.
We went to the same spot I had shot pictures before and I held the camera so he could see the photo’s appear on the screen on the back of the camera as they were taken.
I took a couple of shots of the same area.
Eg:

Nothing. No mist, no ‘phenomena’.
That’s annoying. Now I’ve got a ‘witness’ with me nothing’s appearing.
Then he stepped closer to the camera on my left as I took the next shot:

It’s back!….hold on a minute…
This was a cold damp late night in Rendlesham Forest. Cold enough to see your breath for a short time after exhalation.
Bah!
‘Entity’manifestation?
No.
Paranormal Phenomena?
No.
I was using a flash to light the dark area I was photographing and when I breathed out in a certain way my visible breath would be lit by the flash and would appear in the photo as this ‘strange mist’!
we took a few more shots, deliberately breathing out in front of the camera as I took them and this was the result:

In the photo it looks way too thick and fog like to be just breath but that’s exactly what it was.
An initial excitement of possibly capturing something ‘paranormal’ had, on further experimentation turned out to have a rational explanation.
Now, look an many ghost sites and paranormal facebook pages and you’ll often see photo’s similar to these above reporting to be paranormal phenomena.
I was able to discover what was actually happening in a matter of minutes and although it was a bit disappointing, it was good to get what was an undeniable explanation that was confirmed with repeated experimentation.
Surely those who post pictures like these could have found out the same explanation I did?
Using a flash to take photo’s in cold damp environments will capture all kinds of things that could make you think you had caught on camera evidence to support ‘The paranormal’.
But BEWARE!
Do some of the posters of these pictures post them as paranormal yet know they are just camera flash anomalies?
Possibly, maybe in some cases definitely.
If you really care about the paranormal, as I do, then you want to explore and find the truth of experiences.
Having paranormal experiences makes you aware that there is a real phenomena occurring in our lives, but backing up this awareness with fakery, hoax and untruths (which unfortunately happens time and time again in this field) does the subject matter and those who experience it no favours at all and only continues the ridicule and dismissal by those who have not experienced these things themselves.
There was a certain satisfaction in ‘debunking’ my own photographs.
A satisfaction in discovering the truth, rather than a blanket ill-informed dismissal by ‘debunkers’ who use the line of; ” I don’t believe it is possible, so it can’t be”.
That’s just as bad as backing up an awareness of the paranormal with lies, a willful self delusion that is also unfortunately common.
How do we move the paranormal field forward?
Expose the lies, the liars, the hoaxes and the hoaxers and investigate with an open mind.
Also, don’t be quick to make an assumption based on initial observations or expectations.
Be skeptical, but open minded.
And beware of flash photography!